Author: Roter Precision
Geospatial has become omnipotent and omnipresentThe geospatial industry saw a huge boost with the rise of computing power. Modern technologies like LiDAR and photogrammetry have been widely adopted on economic platforms such as ordinary cars and remotely piloted vehicles like aerial drones and autonomous underwater vehicles. The technical breakthroughs have provided us with huge datasets collected from the field cost-effectively, frequently and in real time. These datasets are growing exponentially and modern data technologies like Big Data are being used instead of traditional data management systems. Deep learning technologies are now being used to analyse the datasets and provide reliable and timely solutions in urban planning, agriculture, infrastructure management, mining, disaster mitigation, etc. Empowering customers While many brands focus on delivering customer satisfaction, the concept of customer empowerment is sometimes overlooked. In the past, meeting customer expectations and delivering good services was sufficient. The modern consumer, however, has many more options to consider — from greater competition among brands to new technologies and channels at their disposal. To empower customers and make them confident in their choices, brands must make each experience seamless and meaningful, while listening closely to their feedback. At Roter Group of Companies, we believe in educating customers for informed decision-making. We go beyond regular sales model to a consulting model by focusing on an in-depth understanding of the customers’ requirements and assisting them in opting for the right product for the right job, even if we that product is not a part of our offerings. Because in the end, what matters the most is customer trust. Welcoming changes Changes are always welcomed at the Roter Group of Companies, specifically in technological advancements concerning products and services. That’s because these bring in efficiency and effectiveness, resulting in positive sentiments in the overall ease of doing business. The disruption in technologies, both in hardware and software, such as the development of high precision sensors and products, have created new opportunities. At the same time, quick data processing software has helped geospatial become omnipotent and omnipresent. R&D has been part of the DNA of our company since its inception. We have been consistently enhancing our products and services to provide the highest level of satisfaction to the industries and individuals we serve. We believe that a well-planned investment in R&D is always for a secure future. Enhancing productivity Nothing is constant in the world, and so the economic activities are no exception. Every slowdown is a periodical lag that requires reviewing and restructuring of policies and regulations for a more focused economic growth. As far as our business is concerned, none of the economic slowdowns have left any permanent impact on us and will never do so, because of our multisectoral and global business strategies. Geospatial data and technologies help industries and governments increase productivity and reduce wastage, which itself can bring a noteworthy impact during a perceived global recession.Read more 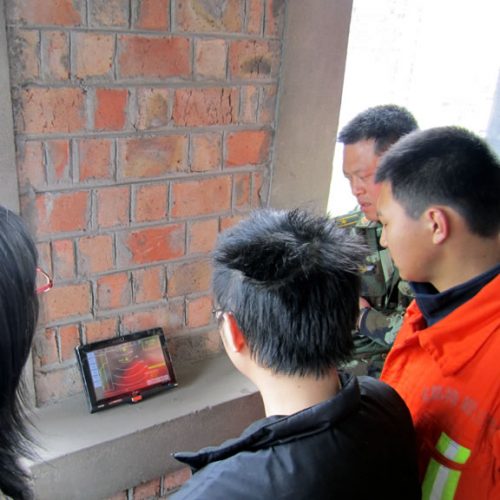 Author: rotergroup_company
Remember Lance Naik Hanamanthappa? The soldier who was buried under an avalanche in Siachen for six days before the rescue team pulled him out, alive. His miraculous survival had surprised everyone. And why not? Never before in history, had anyone been rescued alive, days after he was buried under about 25 feet of snow. But six days is a long time, and he eventually succumbed to his injuries. Now imagine a scenario where rescue teams were laden with technology that could penetrate through snow and provide the coordinates of a buried victim. These teams would have been able to locate and rescue Hanamanthappa within hours of the avalanche. He would have survived the disaster. Unfortunately, this wasn’t possible then, but can easily be done today in India… with Rescue Radar. What is Rescue Radar? As the name suggests, it’s a radar meant to rescue people. The radar uses Ultra-wideband (UWB) technology to locate live victims trapped under the debris of collapsed structures. It doesn’t matter whether the victims are moving or immobile, UWB radar’s powerful sensors can detect minor movements like shallow breathing and heartbeats. It can even help distinguish between an animal and a human being, thus making it one of the most advanced technologies used by disaster management agencies or Search and Rescue (SAR) organizations worldwide to locate people in critical situations. How does Rescue Radar work? The low-maintenance Rescue Radar case comes with two parts: A tablet and a Rescue Radar System. All that an operator is required to do is place the system at a fixed location in a disaster zone, and monitor changes on the tablet. This is how Rescue Radar works: Once the system is switched on, the radar sends Ground Penetrating Radar (GPR) signals into the subsurface to detect movement. GPR signals can penetrate snow, soil and building materials to varying depths. Its enhanced signal analysis can sense periodic motion such as breathing or heartbeats; and within seconds, the distance between the victim and the system is displayed on the tablet. A consistent life status symbol over a number of cycles (time lapses) confirms to an operator that the victim is alive, thus reducing false alarms and saving precious time and effort of the rescuers. Rescue Radar is designed for the harshest weather conditions, can operate from -400C to +500C and can detect survivors up to the depth of 30 meters. It comes in an All-in-one package, is handy and requires no additional setup. Why India need this technology? Climate change and India’s unique geo-climatic conditions make it one of the most disaster-prone countries in the world. In fact, it ranks 14th in the list of the most vulnerable countries in the world, as per the Global Climate Risk Index report 2019. According to the National Disaster Management Authority of India, nearly 12% of the country’s total land area is prone to floods, and more than 58% of the landmass is earthquake-prone. The hilly areas are vulnerable to landslides and avalanches. Moreover, out of 7,516-km long coastline, close to 5,700 km is exposed to cyclones and tsunamis. Disaster risks are further compounded by man-made calamities like building collapse, fires, mining accidents, bomb blasts etc. Given India’s population, any disaster is likely to cause loss of lives. For example, due to heavy rains in Mumbai in June last year, a building collapsed killing 14 people. In fact, as per the National Crime Records Bureau, an average of seven people die every day due to the collapse of various structures in India (data available between 2001 and 2015). Major disasters usually damage infrastructure, causing loss of life and injury as people get trapped under debris. The difference between life and death is a matter of hours in these calamities. Hence, the life-saving response needs to be quick. Who all can benefit from our technology? Rescue efforts are often coordinated efforts among various specialized SAR agencies. In India too, it is no different. Although the National Disaster Response Force (NDRF) is the specialized force for responding to all kinds of disasters, it is often supported by other agencies depending upon the nature and scale of the devastation. Some of these organizations are: • State Disaster Response Force (SDRF) – Raised by states, they are meant to quickly respond to disasters anywhere in their respective states. • State police – They are usually the first responders in any natural or man-made disasters. • Fire Services – Their role is not only restricted to firefighting but also to rescue operations during emergencies. • Indo Tibetan Border Police Force (ITBP) – It is a specialized mountain force and the first responder for natural disasters in the Himalayas. • Indian Armed Forces (Indian Army, Indian Air Force or Indian Navy) – Their role in disaster management is well-known. Their strength lies in their manpower and the ability to move quickly to any disaster-affected area. Conclusion In India, NDRF is the first agency which is using Rescue Radar to find and save buried people. But given the country’s vastness and vulnerability to disasters, it’s important that every agency dealing with SAR operations has types of equipment that can quickly detect people under debris. After all, time is the most important factor in SAR operations, and disasters can happen anytime, anywhere. Imagine if only India had Rescue Radar with it in June 2013 when Kedarnath floods occurred, how many more people could have been saved? ================